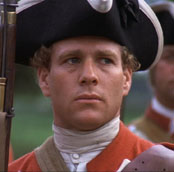 Barry Lyndon, a lavish, three-hour long period drama based on William Thackeray’s novel about the rise and fall of an 18th century Irish scoundrel was directed by Stanley Kubrick and released in 1975. It was his least commercially successful film, however 30 years later, it was proclaimed a masterpiece by critic Roger Ebert and director Martin Scorsese. Maria Pramaggiore, author of Making Time in Stanley Kubrick’s Barry Lyndon, will introduce the film on February 14th and will take part in a discussion about the work and to launch her book at the IFI on Feburary 18th.

Here, Maria talks about how she came to write her book:

For me, writing a book on Stanley Kubrick’s Barry Lyndon (1975) became a process of confronting, and attempting to solve, a series of interconnected riddles.

I’ll share some of the questions that interested me about the film and invite you to join me in pursuing the mysteries of Barry Lyndon at a screening of the film on Saturday, February 14th at 13.00, and at an Afternoon Talk with myself, Kubrick music scholar Chris Morris, and Richard Daniels, the senior archivist at the Stanley Kubrick archive in London, on Wednesday, February 18th at 16.00.

1. Why was Barry Lyndon so unpopular, especially in the U.S., becoming Kubrick’s least commercially successful venture?  Some scholars say it was a matter of bad timing. Was the film behind the times, a staid costume drama, or was it, instead, ahead of its time, presaging the popularity of the heritage film in the 1980s? 2. Why did Kubrick turn to a somewhat lesser known novel (not nearly as famous as Vanity Fair) written by William Makepeace Thackeray, a Calcutta-born Englishman, who had travelled in Ireland and married an Irish woman named Isabella Shawe? Barry Lyndon is the only Kubrick film based on a book written before the 20th century. (Spartacus (1960), set in ancient Rome, was based on a historical novel published by Howard Fast in 1951.) 3. What 18th century painters did Kubrick cite in the film? (Hint: one of them is famous for his portrait of a boy in a blue velvet suit.) Did Kubrick draw these visual comparisons in order to add to the film’s documentary realism (something critics touted at the time) or, instead, to further distance the viewer from the action? 5.  What real life Irishman — called by some the worst husband of the 18th century  — was the model for Thackeray’s and Kubrick’s main character, Redmond Barry? (Hint: he married then wealthiest widow of his day, the Countess of Strathmore, an ancestor of Queen Elizabeth.)