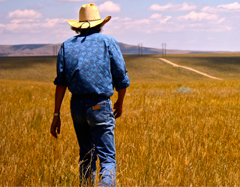 John T. Davis is internationally recognized as Northern Ireland’s most distinctive documentary filmmaker and cinematographer. To mark his 70th birthday on March 7th, 2017, and in recognition of his over 40 years of filmmaking, we present this selected retrospective of his work.

Born in Holywood, Co. Down in 1947, John showed an early talent for technical design but went on to study painting at Belfast College of Art. The inheritance in 1974 of an 8mm camera from his uncle John McBride Neill enabled John to make his first film, the experimental Warhol/Reid-inflected Transfer (1975). He began his professional filmmaking career in 1977, and rapidly developed a personal vision and poetic style that was to characterize his work throughout his career.

In recent years John has proven himself an accomplished lyricist and performer of his unique brand of Western music, and in 2016 he released two albums Last Western Cowboy and Indigo Snow.

He was elected to Aosdána in 2005 in recognition of his significant contribution to the arts in Ireland.