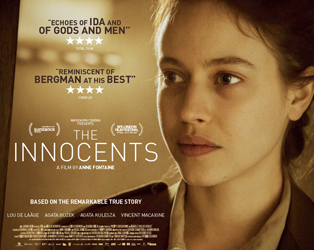 WIN A SIGNED ‘THE INNOCENTS’ POSTER AND A DVD BUNDLE

Poland, the winter of 1945; an isolated community of Benedictine nuns are the target for systematic abuse at the hands of the occupying Russian forces in Anne Fontaine’s (Coco Before Chanel) assured, sober period piece. A semi-fictionalised account of true events, The Innocents sees Mathilde Beaulieu (Lou de Laâge), a French Red Cross worker and former Resistance fighter become embroiled in a tragedy when she helps a young nun seeking treatment for a sister whom she claims is close to death. Visiting the abbey, Mathilde finds many of the nuns in an advanced state of pregnancy; compelled to action, she must first contend with the hierarchies of power within the convent, who will stop at nothing to suppress the shame of such a scandal, if she is to give these women the help they require.

The Innocents will screen as part of the IFI French Film Festival on November 17th. Tickets are available to buy from here.

The Innocents is released in the IFI on November 18th.

Courtesy of Picturehouse Entertainment, we have a film poster of ‘The Innocents’, signed by director Anne Fontaine, to give away along with a very special DVD bundle which includes The Lobster, How To Change The World, Dark Horse and A Field in England. There is also a runner-up prize of a DVD bundle up for grabs.

To be in with a chance of winning, please answer the following question:

Who is the director of The Innocents?

Competition closes November 16th at 5p.m. and winners will be notified by email. Contents of DVD bundle prize may be subject to change.