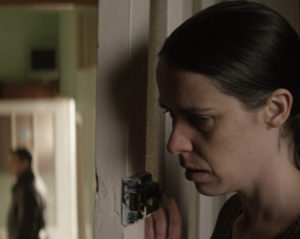 Ruth (Caoilfhionn Dunne) is a woman filled with rage, guilt and self-loathing, unable to forgive herself for a drunken indiscretion with a colleague which resulted in the loss of her husband and her unborn child. As her moodswings and angry outbursts increasingly test her workmates’ patience, she seeks help but is coming to believe that there is only one course of action to ease her pain. In a characterisation that is uncompromisingly dark and, for a female role, unusually violent, Caoilfhionn Dunne presents a portrait of a woman, once respected as a senior figure in a maledominated environment, now spiralling downwards into depression, alcoholism and despair.

Writer/director Ciaran Creagh creates a fitting vehicle for this extraordinary performance in a tightly-scripted film that is as bleak and raw as it is memorable.