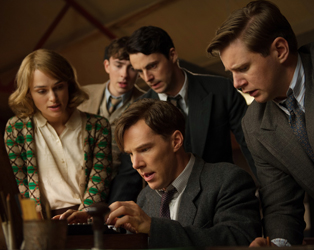 Celebrating The Imitation Game, the new film from director Morten Tyldum which is being released this Friday, November 14th, we have a film quad-poster and two DVDs (Tinker Tailor Soldier Spy and The Two Faces of January) courtesy of our friends at StudioCanal to give away to one lucky winner! Norwegian director Morten Tyldum (Headhunters) infuses the film with the edge and suspense of a committed thriller, while the celebrated cast are quite superb. Benedict Cumberbatch’s performance as Turing has justifiably been identified as award-worthy, though Keira Knightley, playing Turing’s companion and ally Joan Clarke, is equally strong.

Which of these films was directed by Morten Tyldum?

Competition closes at 12pm, Friday, November 14th, 2014. The winner will be contacted by email shortly after. (See IFI Terms and Conditions regarding prizes and competitions.)