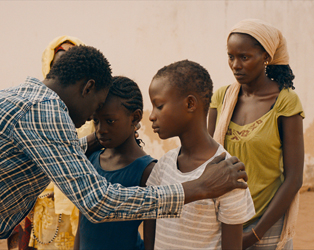 Migrant labourer Amin (Moustapha Mbengue) has come to France to provide for his wife and three children who have remained back home in Senegal. Having lived in Paris for nine years in shared accommodation, earning a meagre wage with construction work, Amin has resigned himself to a life of compromise. While working on a home renovation project Amin meets Gabrielle (played by one of France’s most celebrated actresses and Festival guest in 2013, Emmanuelle Devos), a middle-aged divorcée with a complicated personal life, and a warm bond between the two lonely figures gradually develops.

Director’s Note: A relevant and current drama from the director of César winner Fatima, portraying an admirable and sensitive depiction of the titular Amin in this compassionate film.