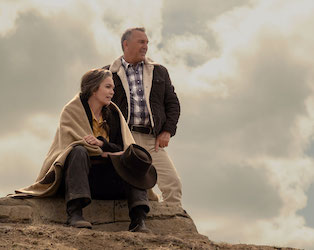 Retired sheriff George Blackledge (Kevin Costner), and his wife Margaret (Diane Lane), break horses on a ranch in Montana; they have a grown son, James, whose death, shown at the film’s outset, leaves a vulnerable widow, Lorna (Kayli Carter) and infant boy behind. Three years later, Lorna, now married to the volatile Donnie Weboy (Will Brittain), disappears with her husband and son, instigating a narrative that at first appears to be a melancholy reimagining of John Ford’s The Searchers, albeit one set in the early ‘60s, as the late-middle-aged George and Margaret set out to North Dakota to take matters into their own hands and retrieve their grandson, before veering into gothic suspense territory with the introduction of Weboy matriarch Blanche, vividly portrayed by a menacing Lesley Manville.