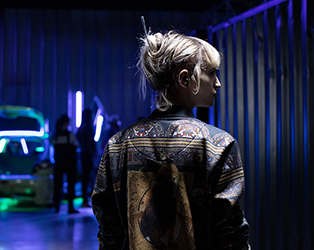 Julia Ducournau follows her debut, the cannibalism-themed Raw (2016), with the Palme d’Or-winning Titane. Taking its cue from kindred spirits such as David Cronenberg and Gaspar Noé, it begins in a hallucinatory rush as car show model Alexia (newcomer Agathe Rousselle, in a performance of fearsomely committed physicality) is revealed as a woman who kills for a variety of reasons, and whose only truly successful sexual encounters are with cars, one of which leads to pregnancy. Forced to flee as a result of her activities, she assumes the identity of a missing boy returning to his father, fireman Vincent (a grizzled Vincent Lindon). As the film changes gear to develop the complicated relationship between the two, it becomes a challenging and provocative meditation on gender identity and transformation, and of the differing experiences of parenthood and physical decline as Alexia’s gestation nears its end.