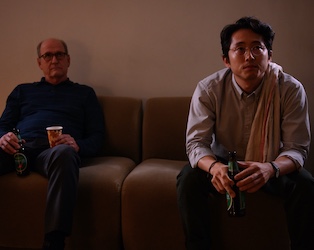 Brigid Blake (Beanie Feldstein) and her boyfriend Richard (Steven Yeun) have just moved into a dilapidated duplex in Manhattan’s Chinatown. Before they’ve had a chance to settle, or even move their furniture in, Brigid’s parents Erik (Richard Jenkins) and Deirdre (Jayne Houdyshell), along with Erik’s Alzheimer’s-afflicted mother (June Squibb), and Brigid’s older sister Aimee (Amy Schumer), arrive to celebrate Thanksgiving. As the evening proceeds, the almost pathologically polite Richard tries to busy himself with meal preparation while the Blakes ease themselves into their habitual teasing. Long-standing grievances are resurrected and uncomfortable confessions are made. A visually imaginative adaptation of one Tony-winning play, which interrogates every corner of the crumbling apartment to unnerving effect, Stephen Karam’s directorial debut tracks the emotional intricacies of a working-class family bound by tradition, contention, and unshakable loyalties, featuring nuanced performances from an impeccable ensemble.