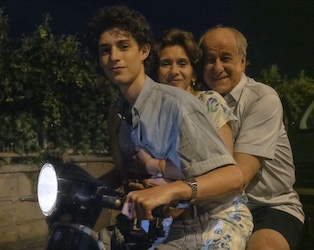 Paolo Sorrentino’s (The Great Beauty) ninth feature is his most personal and directly autobiographical, exploring his youth in Naples in the 1980s. 17-year-old Fabietto (Filippo Scotti) is an awkward young man struggling to find his place, but finding joy in an amazing family who love life, relish mischief, and take pleasure meddling in one another’s complicated relationships. Two episodes are given prominence in shaping Fabietto’s adolescent self: the euphoria that erupted throughout in the city when Maradona signs to play for Napoli (the film’s title alludes to a controversial incident in his tenure at the club), and a terrible accident that changed the course of his life forever. A poignant, evocative coming-of-age film, full of outsized characters and colourful incidents that call to mind Fellini’s Amarcord, The Hand of God sees Sorrentino reigning in his visual excesses without sacrificing his trademark cinematic expansiveness.