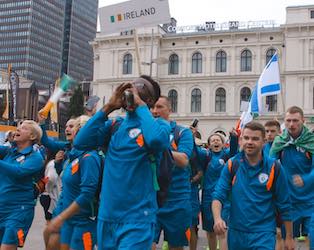 Presented in association with First Fortnight

The Irish Homeless Street Leagues take a unique approach to helping homeless people and recovering addicts reclaim their lives by using the power of sport. The film follows a group of players as they rise from their daily struggles to compete on the world stage in the Homeless World Cup, finding self-worth & a sense of purpose along the way. Featuring contributions from actor Colin Farrell (the ambassador for the team), the film showcases the dramatic ripple effect that is possible within any society when its marginalized members are empowered to fulfil their true potential.