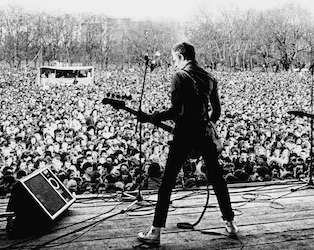 To pre-order the film to watch on IFI@Home, please click here. The film will be released on September 21st.

Britain in the late 1970s. Punk is exploding and the country is divided over immigration. The National Front is gaining strength as politicians such as Enoch Powell push a xenophobic agenda. Rock Against Racism (RAR), a grassroots activist movement aiming to give a voice to the voiceless, is founded in 1976, reporting stories that the mainstream media ignored, like immigration and the Catholic side of the Northern Ireland conflict. The Clash, Steel Pulse, Tom Robinson, and other major artists lend their support as RAR organises an anti-fascist carnival in Victoria Park. With blistering archival footage, White Riot depicts a moment in time when music strove to change the world and challenge the status quo. It’s Woodstock meets the March on Washington, punk-style.