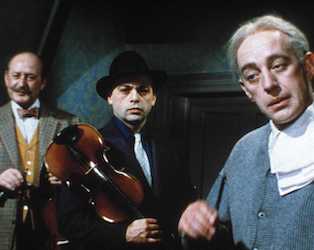 Arguably the finest of the Ealing comedies, and certainly one of the best British comedies, The Ladykillers, Alexander Mackendrick’s final film for the studio following successes such as Whisky Galore! (1949) and The Man In The White Suit (1951), receives a welcome digital reissue. Eccentric widow Mrs. Wilberforce (the inestimably charming Katie Johnson) is known to the local constabulary for her frequent far-fetched reports on the activities of her neighbours. A knock on her door reveals Professor Marcus (a wonderfully sinister Alec Guinness, bearing a marked resemblance to Alistair Sim), who wishes to rent a room in the house in which he and his amateur string quintet may rehearse. In reality, the ‘quintet’, including Peter Sellers and Herbert Lom, is a gang of criminals planning their next heist. Mrs. Wilberforce’s well-intentioned meddling causes the gang no end of frustration in this absolute pleasure.