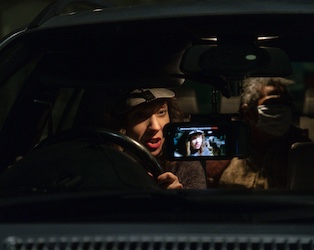 From Savage and the creative team behind Host, DASHCAM follows an abrasive musician’s night, via her livestream, as it takes a dangerous turn when she agrees to help transport a frail elderly woman out of town. The film stars breakout Annie Hardy as a caustic online streamer whose anarchic behaviour triggers a non-stop nightmare. The film also stars Angela Enahoro and Amar Chadha-Patel.