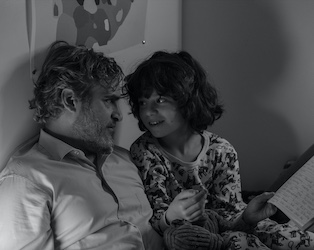 Siblings Viv (Gaby Hoffmann) and Johnny (Joaquin Phoenix) haven’t spoken since drifting apart after their mother’s death, but while raising her bright young son Jesse (Woody Norman) Viv finds herself caring for Jesse’s father who is ill and in need of treatment in another state. In desperation she accepts help from Johnny, a radio journalist, who’s currently touring the country recording interviews with children about their hopes and fears for the future. What starts as a weekend together soon becomes a trip across America, as Jesse and Johnny are flung together and forced to make it work.

This tender exploration of family dynamics and learning how to be there for one another from writer-director Mike Mills (Beginners, 20th Century Women) combines insightful writing with beautiful acting performances and frank and timely views on the future from young American children. All of this seen through Robbie Ryan’s atmospheric black and white cinematography, and accompanied by an evocative score from The National’s Bryce and Aaron Dessner, make it simply irresistible.