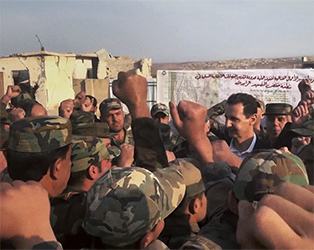 This screening will be followed by a Q&A with directors Ronan Tynan and Anne Daly, with Right Honourable Frank Clarke, former Chief Justice.

Bringing Assad to Justice charts the extraordinary international efforts made by a diverse range of Syrians to bring one of the world’s most notorious human rights abusers to justice. In Syria, as a system of extreme repression, torture and mass murder prevails, human rights lawyers Anwar al-Bunni and Mazen Darwish, both previously imprisoned and tortured, help to secure arrest warrants for the regime leaders in Germany, France and elsewhere. British journalist Paul Conroy, wounded alongside assassinated US journalist Marie Colvin in Syria in 2012, speaks of her family’s civil action, filed against the Syrian Arab Republic for her murder.