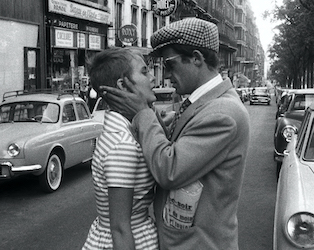 Astonishingly, 60 years have passed since Jean-Luc Godard’s debut feature, and one of the first films in the movement that would come to be termed the Nouvelle Vague, first hit cinema screens, announcing the arrival of a director who has spent the intervening decades continuously striving to redefine and reshape the medium. While the results of his efforts have been often exasperating, occasionally impenetrable, but always intriguing, Breathless retains an iconic status accorded to few films. The story itself is relatively straightforward; criminal Michel (Jean-Paul Belmondo), who styles himself after Humphrey Bogart, hides out with American student Patricia (Jean Seberg) following his murder of a policeman. However, it is in the manner of telling that Godard announced himself as a revolutionary auteur; shot using handheld camera and minimal lighting, and using jump cuts in an innovative way, the film remains fresh and unique.