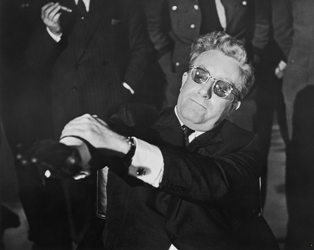 Even in a filmography as acclaimed as that of Stanley Kubrick, Dr. Strangelove… represents a singular achievement. Made at the height of Cold War tensions, it was originally intended to be a serious drama until Kubrick’s realisation that there was a rich seam of dark humour to be mined from the seemingly ever-present threat of nuclear annihilation.

Brigadier General Jack D. Ripper (Sterling Hayden), having lost his mind to paranoia, sets in motion a nuclear attack without the knowledge of his superior officers. His executive officer Group Captain Mandrake (Peter Sellers) tries to avert disaster, as do US President Muffley (also Sellers) and his advisers, including the sinister doctor (Sellers again).

With even the smallest parts perfectly sketched, and actors delivering their lines brilliantly, surrounded by Ken Adams’s famed sets, Dr. Strangelove… remains arguably the most entertaining depiction of humanity’s end.