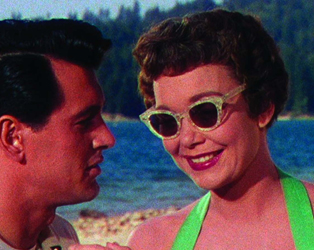 With romance in the air in February, we focus on the classic ‘women’s picture’, as exemplified by Douglas Sirk. It’s a world of fast cars, rugged men and heroic gestures. Rock Hudson excels as playboy, Bob, ripe for redemption, and Jane Wyman is the widow, blinded by Bob’s actions. Predictable, yes, but Sirk directs without cynicism; using his trademark costume, colour, light and shadow, he creates scenes of great richness, allowing the narrative to fully breathe and absorb the viewer completely, wringing our tears and lifting our hearts as we root for a happy ending. This is romance, writ large on the big screen.