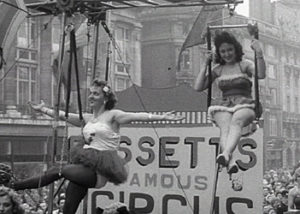 A short Hollywood drama where the people of Tara, all druids and non–believers, are pitted against St. Patrick and his followers.  The film ends with an address (lasting approximately 7 mins) to camera by Rosary Crusader Fr. Peyton.

An Tóstal, a series of festival celebrating Irish culture in the 1950s, was designed to attract tourists into the country in the spring. President Seán T. O’Kelly opens the festival with a float-filled parade in Dublin. The pageant of Saint Patrick is presented in Croke Park followed by a colourful slate of events around the country.