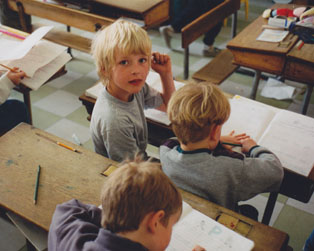 Join us for free films every Monday, Wednesday and Saturday from the IFI Irish Film Archive. Simply collect tickets at IFI Box Office.

PROGRAMME ONE
MIN IRSKE DAGBOG / MY IRISH DIARY
Min Irske Dagbog is one of three films made by renowned Danish documentarian Jon Bang Carlsen in Ireland in 1996. This one, narrated by his young son Hjalmar, tells of his year in a tiny village school in Ballyvaughan, Co Clare where he feels very isolated with nobody but his baby brother Simon to play with until he learns English and makes new friends.
FILM INFO: Jon Bang Carlsen, 30 mins, Denmark, 1996, Digital