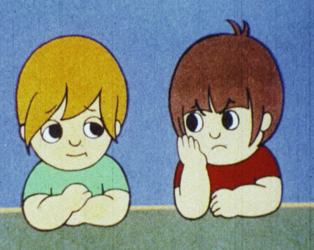 PROGRAMME TWO
THE ENEMY
With scenes of space missions, astronauts and dramatic war footage, this public health film demonstrates the need for boys and girls to be
ever-vigilant in the battle to prevent germs entering their bodies. Directed by Theo Hogers for the Department of Health.
FILM INFO: 18 mins, Ireland, 1976, Digital