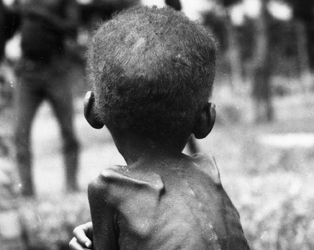 PROGRAMME ONE
NIGHT FLIGHT TO ULI
Filmed in Biafra as the Nigerian civil war drew to a close, the film shows how supplies from Irish and international aid agencies were flown to Biafra to relieve the besieged Ibo people. It includes an interview with the then Biafran leader Colonel Ojuku and evidence of the work being done by Irish relief volunteers in the area.
FILM INFO: 30 mins, Ireland, 1969, Digital

PROGRAMME TWO
CROSSROADS IN NIGERIA
Ten years after the civil war in Nigeria, this film looks at the dilemma facing Catholic foreign missionaries who no longer have control of mission schools and hospitals. Missionaries must now find new avenues of approach in their work of evangelisation.
FILM INFO: 26 mins, Ireland, 1982, Digital