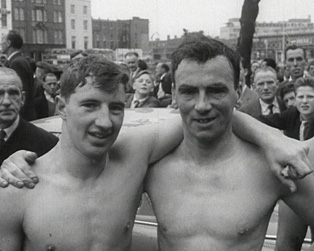 LIFFEY FACES
This film, made by members of the Guinness Film Society (with product placement visible only to the eagle-eyed), follows a toy boat as it sails from Kippure to the sea past a host of rural and urban delights including the Liffey Descent, the Dublin quays, and the Ringsend Regatta.
FILM INFO: 26 mins, Ireland, 1970