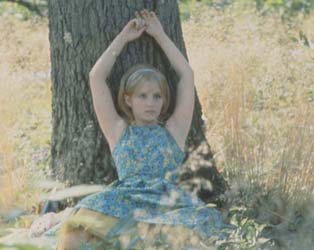 Varda’s intriguingly layered and ironic investigation into the concept of happiness is presented as a classic love triangle with striking modernist inflections. Le Bonheur is also notable for its extraordinarily vivid colour scheme and direct visual references to Impressionist painting.

Real-life married couple Jean-Claude and Claire Drouot play François, a carpenter living in a suburb of Paris, and his wife Thérèse, who works from home as a dressmaker while taking care of their two young children. Although blissfully content in their relationship, François begins an affair with post-office worker Emilie (Marie-France Boyer), his actions taking an inevitable toll on their marriage.