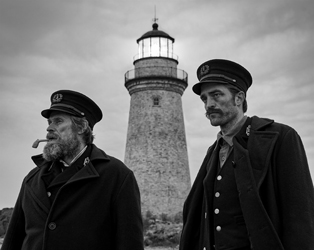 A VISIT FROM ABEL FERRARA PLUS NEW RELEASES FROM MALICK, MENDES AND TERRY GILLIAM THIS JANUARY AT THE IFI

The IFI is delighted to welcome acclaimed director Abel Ferrara to the IFI on Wednesday 22nd to take part in a Q&A following a screening of his latest film, Tommaso, presented in conjunction with the Silk Road International Film Festival. Known for controversial work including Bad Lieutenant, King of New York and The Funeral, this is the first chance for Ferrara fans in Ireland to see his latest work which premiered at last year’s Cannes Film Festival.

The following evening, on Thursday 23rd, the IFI will screen Terry Gilliam’s long-awaited fantasy-drama The Man Who Killed Don Quixote starring Adam Driver and Jonathan Pryce; the film will be followed by a recorded Q&A with the great director and ex-Python himself.

As we enter awards season, films anticipated to be Oscar front-runners include Sam Mendes’s star-studded 1917, in which two protagonists race against time to save a battalion of 1,600 men during World War I. Also based on true events, Bombshell stars Nicole Kidman, Charlize Theron and Margot Robbie and centres on the numerous female journalists at Fox News who spoke out about sexual harassment, exposing the then CEO Roger Ailes. New crime drama Uncut Gems, nominated for five Independent Spirit Awards, follows the story of a charismatic jeweller, played by Adam Sandler, in a race to track down a misplaced fortune.

Taking place during World War II are Jojo Rabbit and A Hidden Life, from directors Taika Waititi and Terrence Malick. Jojo Rabbit follows the story of mischievous ten-year-old Jojo Betzler whose proud membership of the Nazi Youth is in conflict with his mother’s (Scarlett Johannsson) resistance. In contrast to Waititi’s witty satire, Malick’s A Hidden Life tells the profound true story of conscientious objector Franz Jägerstätter, and his battle between his faith, his religion, and his country.

Set in the aftermath of World War II and focused on the redemption of humanity is The People vs Fritz Bauer, a film by Lars Kraume depicting the rigorous search by judge and prosecutor Fritz Bauer for Adolf Eichmann to hold him accountable for his actions during the Third Reich. The film will screen on Friday 14th followed by a Q&A with Kraume, ahead of Holocaust Memorial Day on 27th January; 2020 marks 75 years since the liberation of Auschwitz.

Coming-of-age narratives this month include Trey Edward Shults’s family drama Waves and Armando Iannucci’s The Personal History of David Copperfield. Likewise harkening back to Dickens’s days is Robert Eggers’s psychological horror The Lighthouse. Filmed in Nova Scotia and starring Willem Dafoe and Robert Pattinson, the film features a 70-foot working lighthouse which was constructed specifically for the film.

Rounding out the month’s new films are Mikhaël Hers’s Amanda, back after premiering at the IFI French Film Festival in November, and romantic-drama road movie Queen & Slim, the feature film debut of Melina Matsoukas, known for her award-winning music videos for artists such as Beyoncé, Lady Gaga and Rihanna.

To help ring in the New Year, the IFI will screen John Huston’s final film The Dead on Monday 6th. Set during a dinner party on the Feast of Epiphany, the film reveals aspects of Dublin’s early 20th century history as Joyce saw it; the event will be introduced by archivist and broadcaster Catriona Crowe.

In conjunction with the Institut Français and the French Embassy in Ireland, The Night of Ideas returns this January with a screening of Bruno Sauvard’s Wine Calling, a look at progressive biodynamic and organic winemakers challenging the norms of the French wine industry. The screening will be followed by a special wine reception plus a panel discussion featuring Sauvard, award-wining journalist Catherine Cleary, Pamela Walsh of Wicklow Way Wines, and environmental scientist Dr Cara Augustenborg.

The IFI is proud to once again partner with First Fortnight, the annual arts festival which aims to challenge mental health stigma through the arts. On Saturday 4th there will be a screening of Irene’s Ghost, in which director Iain Cunningham seeks to find out about the mother he never knew. On Wednesday 8th, director Áine Stapleton will take part in a Q&A following a screening Horrible Creature, her second film about the tragic life of Lucia Joyce, while the IFI Family screening on Sunday 19th, Feeling Fine, will include a new collection of international short films for young people aged 8+.

As part of Temple Bar TradFest 2020, the IFI will screen two powerful documentaries about traditional Irish musicians. A Song for Ireland, from the late Northern Irish filmmaker Arthur MacCaig, will screen on Saturday 25th. The film uses archival footage to pinpoint key moments in Irish history and features talented musicians such as Chris Byrne, Declan McLaughlin, Maria Cahill and the Wolfe Tones. The following day, Ciarán Ó Maonaigh’s new film about the career of fiddler Paddy Glackin will show. ‘Se Mo Laoch will be followed by a Q&A with director Ó Maonaigh, and a short musical set from Paddy Glackin himself.

January’s Irish Focus on Wednesday 29th maintains the musical theme; The New Music is a drama from Chiara Viale which follows the life of a pianist diagnosed with Young Onset Parkinson’s, and how a punk band changes his life. Finally, this month’s Bigger Picture will be Alfred Hitchock’s Rebecca, introduced by award-winning screenwriter Mary Kate O’Flanagan on Thursday 16th at 18:30.