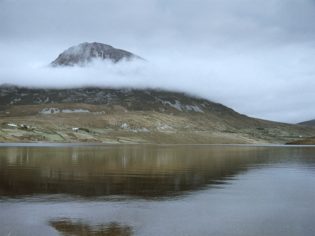 To celebrate World Day for Audiovisual Heritage, the IFI Irish Film Archive is celebrating the work of Oscar-nominated filmmaker Patrick Carey, specifically his 1970 short film Errigal. Part of a series of lyrical and evocative films depicting the landscape, flora and fauna of Ireland, this stunning documentary is set against the scenic backdrop of Mount Errigal in County Donegal.

In the film, the mountains of Donegal are depicted like fairy-tale characters, where the hero Mount Errigal competes with neighbouring villain Mount Muckish. A fantastical narrative explains that the landscape is ‘a battleground where the weapons are the elements themselves’. Dramatic footage of storms and lightning blends with a superb score by Irish composer Brian Boydell.

To accompany the film which is featured on the IFI’s online platform the IFI Player, Archive Datacine and Grading Officer Gavin Martin has written a blog discussing his work scanning and remastering this observational and reflective work.

There are many causes of image problems in older films: stock type, age, inappropriate storage environments, frequency of handling and projection, are but a few. No magic restoration formula exists, and when commencing this type of work. It’s often hard to visualise how much of the original film can be recovered, especially if the original is in bad condition. At the IFI Irish Film Archive we use a wide array of digital tools to restore as much of the filmmaker’s original vision as possible.

When the IFI’s Irish Film Programming department submitted a request for a digital exhibition copy of Paddy Carey’s 1970 short film Errigal, I jumped at the opportunity to work on one of the finest examples of landscape cinematography held in the archive. The film derives its power from a magical fusion of changing light, shadows and contrasts, shaped by Irish weather and cloud formations over the Donegal landscape. These nuances illustrate why Patrick Carey’s involvement was highly sought for big international feature productions. Bringing Errigal’s meticulous images back to their initial levels of colour and contrast, from 50-year old film elements, was difficult but rewarding. 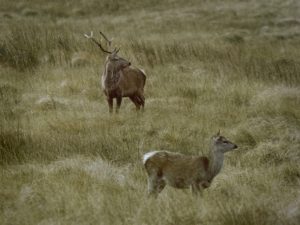 The damage caused to a film by aging such as issues in colour and contrast, can be distracting for an audience. Even when stored in climate-controlled vaults, 60s and 70s era films deteriorate rapidly, and generally now look nothing like they did when initially released. Errigal proved no exception, it had faded leaving a heavy red and magenta cast across the picture. When cyan and yellow dyes deplete, the visibility of red and magenta hues increase. If these photochemical reactions advance too far unchecked, little separation in the colour layers of the film remains, ultimately leading to an almost monochromatic state. Additive digital colour timing can counteract this to a limited extent. Fortunately, Errigal  had some colour separation remaining, so I could attempt to remap its colour ranges into a digital ‘simulation’ of the original colour dye composition now sadly absent from the extant film.

Fading of contrast and gamma are also problems, as aging film loses its snap and the crispness of its shadow to highlight ranges. Full tonal scales from pure black to white compress to a narrow ‘wedge’ of greys, missing many of the original tones. A good analogy for this deterioration is a black and white photograph exposed to sunlight over time, it assumes muted greys, and grey-whites, with no true black or white values remaining.

Damage is also caused by stress and strain on films through poor projection, rough handling, and volatile storage conditions. This manifests as the dirt, tramlines, and warping we associate with archival film. Arguably this type of damage has charm at low levels but is generally unwanted by those in the restoration field, and by filmmakers. They were never there in the first place, so why now should these irritating distractions be left in the film?

Fortunately, today the ‘digital intermediate’ process rescues films from the brink of irretrievable degradation. It allows a ‘high-res’ film scan to undergo an advanced workflow of repair operations. Its grading tools evolved over 30 years, from their roots in the film laboratory’s ‘printer lights’, into the advanced precision image-control suites we use today. We are now able to address problems that the filmmaker may have been unable to fix due to the technological limitations of the time. For example if a film has a small exposure problem in an area of a shot that the lab wouldn’t have been able to adjust without changing exposure on the entire image, it can now be tracked and manipulated in isolation if so desired, without altering the rest of the picture.

Software and scanner alone are insufficient tools for precision restoration, you also need a good computer, a calibrated monitor, a neutral colour viewing environment, as well as image measurement tools. Without this infrastructure inaccurate levels in colour and contrast will find their way on to the screen.

A survey located the Archive’s best-preserved elements for Errigal, including an Irish language print, which was used as our key source. However, as the theatrical presentation was to be in English, we sourced narration and credits from other copies, including a mute 35mm negative. Unlike titles in the Patrick Carey collection in the 16mm format, the 35mm version of Errigal  had much finer detail, which would lay a strong foundation for the restoration.

After making physical repairs using tape and splicer, came the fun part, scanning the elements. You can see in the screengrab below of the ‘before vs after’ treatment. Our scanner, the Black Magic Cintel, takes in extra space around the picture area. This includes perforations and soundtrack. The perforations are used for stabilisation of the film if it has become unsteady due to shrinkage. The optical audio channels resembling mathematical sine waves, are used to extract ‘in sync’ digital audio files.

Throughout the process, it was essential to use videoscopes, tools used to measure strengths of the Red, Green and Blue values on a numeric scale, which are converted by the scanner from the photochemical image into a digital signal. This feeds into DaVinci resolve, a versatile image processing application offering great control, with recent versions adding digital cleaning tools that I was keen to use on Errigal.

During scanning I placed tonal values across the fullest range, while keeping extreme highlight and shadow details intact, for example the bright clouds and deep mountain shadows. However, while scanning I retained the offset in RGB channels that is photochemically present in the film (the red bias in the case of Errigal), deferring manipulation of colour and contrast until post, which offers a more flexible range of choices.

Raw images, though high-quality, look unpleasant fresh from the scanner. They need to be graded with much ‘TLC’, to bring them back to as close to the original film as possible. First the scans are edited into a whole film comprising every frame, then correction nodes are applied to each and every shot, each node representing a stepping-stone towards the goal of making the film look like it did when it emerged from the lab. Efforts must be distributed equitably on each shot to achieve a smooth looking film.

You may ask how this can be done if you have never seen the film as it appeared when first released? Previous versions provide useful references, as does accumulating experience working with film stocks from the era, which have similar visual traits. This experience combined with a familiarity with the filmmaker’s work gives you a good idea how the film should look. 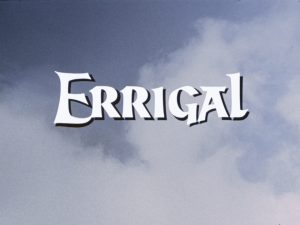 Errigal presented technical as well as artistic challenges. 4k 12-bit files need mammoth computing power, leading to over-night rendering. Workarounds are needed to see adjustments to the image happen in real-time or play-back lags at unworkably slow speeds. Layers of complex image processing on high-resolution files, slow the pace of work. To avoid delays caused by ‘over-taxed’ GPUs, tricks come in handy, such as making temporary proxies of clips, switching down project resolution, caching intensive shots, or temporarily switching nodes off. These workarounds yield responsive results on-screen when you are making changes. Just don’t forget to switch everything back to high quality for final delivery or you will end up having to export the film again, at the speed that paint dries!

A good tip is not to get bogged down. Don’t start drawing boxes to zap every piece of dirt. Strike a balance by removing damage that occludes the picture, while letting less noticeable things through your net. Both taste and experience help decide what levels of damage are distracting, but if it catches your attention on the monitor, it will be sure to scream out when magnified on the cinema screen.

For all their strengths we must be cautious using digital tools. Mishandling them can push archive film too far, compromising it with inappropriate stylisation, digital artifacts and clipping off details in the image. Clumsy use of automatic cleaning filters flattens fine-edged detail in the picture. One of the most important characteristics of film to retain is grain structure, and familiarity with its ASA sensitivity to light is useful knowledge if grain needs to be replicated digitally in a custom overlay. It helps to flip back and forth between the image before and after adjustments, and to zoom into pixel level on the monitor to avoid getting deformations, preserving fine detail, which if altered quickly exposes digital manipulation. A careful and delicate application of grading and cleaning adjustments, applied in specific order, is the key to a faithful outcome to the restoration process.

Working on these projects, you sense the presence of the filmmaker, their past choices guide your present ones. You habitually question your decisions. If they were still present would they be happy with this choice? Is it true to the film? You find if you step away for a minute, then go back, you wonder why you doubted yourself in the first place. These decisions service a conscientious representation of the filmmaker’s intentions. It also helps prior to final delivery to step out of the bubble of immersion and summon a colleague versed in working with archival film to evaluate the work from a fresh perspective.

I hope my efforts to revitalise Errigal  have been fruitful and that you enjoy watching it as much as I did working on it. I also hope that this blog sheds light on the work we’re doing in ‘digital film’ at the IFI Irish Film Archive, and that we can unearth many more cinematic works of beauty and make them presentable for you in the future.