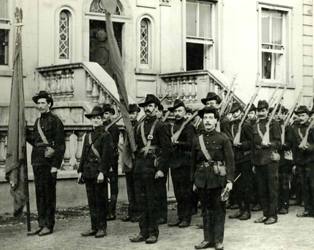 For a century now filmmakers both Irish and foreign have been drawn to the inherent drama in the Irish struggle for independence. Fiction and non-fiction films dealing with the 1916 – 1922 period abound. This programme presents a broad range of cinema and television work focussing particularly on the 1916 Rising.

The tones vary from reverent to satirical, from unashamedly nationalistic to politically interrogative. The compendium of foreign perspectives range from the simple, unmediated camera rushes of British newsreel cameramen to the more complicated narrative layers of John Ford’s adaptation of Sean O’Casey’s 1916 tenement masterpiece; Jack Cardiff’s spin on John Ford’s later fictionalisation of Sean O’Casey’s life; and David Lean’s sumptuous love story to which the events of 1916 are but a footnote. Local filmmakers’ response to the narrative is no less textured: from Neil Jordan’s epic biopic of Michael Collins (itself the subject of much debate around historical accuracy); Isaac Eppel’s powerful War of Independence drama (released on the 10th anniversary of the Easter Rising); RTÉ’s pioneering Insurrection series; Gael Linn’s unashamedly nationalistic Mise Éire (screened at the National Concert Hall in January); the multi-faceted brace of new short works, some reverent, some satirical, inspired by the centenary and commissioned by the Irish Film Board; and the eclectic collection of shorts (mostly released for the 50th anniversary) appearing in the Archive at Lunchtime strand.

A panel populated by filmmakers and historians will explore the value and veracity of the representations.